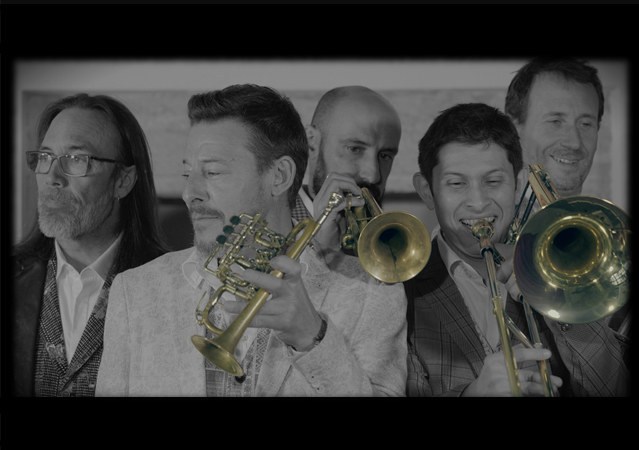 Created in 1998, the Alliance Brass Quintet is composed of musicians from the ” Conservatoires Supérieurs ” from Paris, Lyon and Geneva. Wishing to promote and enrich the brass repertoire, this chamber music ensemble participates in its evolution and construction, notably through the production and diffusion of shows and creations that take into account various forms of artistic expression for all audiences during concerts but also through residencies and cultural mediation actions.

In more than 500 concerts, the ensemble was a great success with the public. The press, unanimous, underlines the right balance between mastery, finesse and fantasy.

After his 3rd album produced in collaboration with the Lyon Oratorio Choir, the Choirs and Soloists of Lyon-Bernard TETU: « Requiem » of Gabriel FAURE”; in an unpublished version for Brass Quintet, Organ and Choirs (arrgt. Hamid MEDJEBEUR) under the artistic direction of trombonist Michel BECQUET. Alliance will present in September 2020 its last 2 Albums: « Saisons # ∞ « (the complete Seasons by Vivaldi and Piazzolla in an unpublished version for brass) and « Plus de saison « (book/CD of the tale written and recorded by novelist Nancy HUSTON).

Alliance is supported by BUFFET GROUP.

Originally from Bordeaux, Eric Planté is soloist in the Republican Guard Orchestra. First prize winner at the Conservatoire National Supérieur de Musique de Lyon in Pierre Dutot’s class, he benefited from the teaching of the great trumpet masters such as Roger Delmotte, Eric Aubier, Jean-François Dion or Francis Hardy.

Certified teacher, he taught at the Conservatoire National de Région de Lyon before joining the CRR of Châlon sur Saône. He is also a professor at the “Pole d’enseignement supérieur de musique de Dijon”.

Honored of the Birmingham International Trumpet Competition, he has performed on the greatest international stages. An eclectic artist, his collaborations are numerous with various classical or more modern orchestral formations sweeping all repertoires both in concert and for multiple recordings (Charles Aznavour, Juliette, various film scores and educational works…).

Collection Director for the Billaudot publishing house, Eric Planté is supported by the Buffet group and plays on the instruments of the BS – Schertzer brands.

Gold medal for horn and chamber music, he obtained in 1997 a Horn Virtuosity Prize at the Conservatoire Supérieur de Musique de Genève as well as the State Diploma for teachers.

Very involved in the regional Culture and Health system, he manages 5 seasons of cultural inclusion for 17 hospital and medico-social structures in the Ain – the Medical Centre for Paediatric Rehabilitation, the S. M. A. E. C. , the F. A. M. Romans Ferrari, the ITEP l’Arc en Ciel and 13 Ehpad.

Founder of the festival Cuivres en Dombes, he is since 1996 Director of the Brass Academy in Dombes.

He began his musical studies at the CNR of Reims, in the class of Amédée Grivillers where he obtained gold medals in Trombone, Musical Formation, Chamber Music and Harmony. Winner of the 1st national trombone competition of Aulnoyes-

In the same year, he was a semi-finalist in the Guebwiller International Competition. He also performs with orchestras or instrumental ensembles (Orchestre National du Capitole de Toulouse, the musicians of the Louvre, Trombone Assaï,…) on ancient and modern instruments.

Certified teacher, he has been teaching at the CRR of Saint Etienne since 2005. He is also solicited for concerts and master classes in Europe, India, Japan, Morocco, the United States, or in China during the Beijing International Trombone Festival.

Composer and arranger, he has been collaborating with the Robert Martin publishing house since 2009.

As orchestral musician, he is the principal tuba at the Saint- Etienne Opera and regularly collaborates with the greatest national orchestras. A studio musician, he records notably with CALI and the band “ELZEF”. From 2009 to 2013, he is artistic director of the « Festival Cuivres en Dombes ».

Passionate about conducting, he perfected his skills in contact with Hervé Klopfenstein and Ylian Mashkevitch. Apart from his missions at the Conservatoire de St Etienne, he is a regular guest of the SYLF and the EOC.

He thus approaches a wide repertoire, from opera to contemporary music through the symphonic repertoire or works with choirs.

Invited on the stage of the Olympia by Cali in 2005, this concert will mark the beginning of a new stage and the collaboration with several artists of the French scene such as Yaël Naïm, la Grande Sophie, Olivia Ruiz, Renan Luce, Woodkid… with whom will follow one another on tour and recordings.

Nicolas Puisais is also the accomplice of DJ Zebra, a UFO on the French music scene, who unravels then patches up the greatest tracks to offer a new listening experience with his famous bootlegs, and who loves to play with all the codes and traditions by going where nobody expects him to go.

Nicolas is now an artistic teacher at the Conservatoire de Musique de Beaune for trumpet and Amplified Current Music classes.