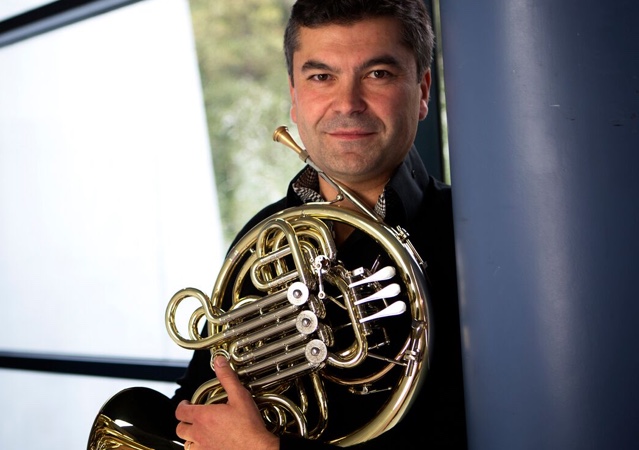 Originally from Tours, Arnaud Delépine won first prize for French horn at the CNSM Paris, under Jacques Adnet and Patrice Petitdidier. He holds a horn qualification (Diplôme d’état et du Certificat d’Aptitude de Cor), and teaches at the Conservatoire À Rayonnement Régional (CRR) of Tours and at the Centre d’Etudes Supérieur Musique et Danse Poitou-Charentes (CESMD). He shares his creative time between the brass quintet Staca’Tours, the Ensemble Orchestral du Loir-et-Cher, the Ensemble Instrumental de Châteauroux and the ensemble Atmusica (contemporary music). He is also supplementary horn player in the Poitou-Charentes Orchestra. He also performs with the Orchestre National de France, the Orchestre National Bordeaux Aquitaine, Orchestre Symphonique Région Centre-Tours, the Opéra de Limoges and the Orchestre Symphonique de Bretagne and has played under the direction of great conductors including Emmanuel Krivin, Christoph Eschenbach, Paul Daniel, Alain Lombard and David Robertson. His passion for the teaching and training of young people has led him to participate in activities at the CESMD (centre for higher studies in music and dance) Poitou-Charentes and the Orchestre des Jeunes du Centre. Highly active in the associative sector, he is president of the Orchestre d’Harmonie de la Région Centre (wind orchestra of central France) and the ensemble A Tours de Cors.

In 2009 he created The Mallet-Horn Jazz Band. Under his direction, this jazz band has achieved its unique character thanks to its composition and originality, enabling it to shine a little-known light on another facet of the horn. Arnaud Delépine is a Hans Hoyer artist, he plays the K10 horn and works with Buffet Crampon to develop the range.